The Delhi Police recently arrested Fridays for Future activist Disha Ravi in connection with a Farmer’s Protest toolkit shared by Greta Thunberg. Indian Police accused Ravi, a 22-year-old climate activist, of sedition for helping to create and share an online “protest toolkit” that outlined how to support the mass protests by farmers in the country. Critics and activists across the world have condemned the action by stating that the charges against Ravi are politically motivated and represent an escalation of the Indian government’s clampdown on dissenters.

Ravi’s action is seen by the current government as an attempt to build an online narrative which may sway public opinion. This worry of the government is not unfound, and people within the ruling party are sharing similar toolkits. For example, BJP affiliate Kapil Mishra through his Twitter handle announced the Hindu Ecosystem (HES) on 16th Nov, 2020. The Google form used for recruitment requires indicating “any special area of interest” in topics like Gau Raksha (cow vigilantism), love jihad, Mandir Nirman (temple building), Hindu Ekta etc. The form also requires persons registering to provide their phone number and join online and offline teams. Ten days after our fake registration, our team was invited to join Hindu Eco System telegram groups. The main group led to Research group, Writers Group and Graphics group. 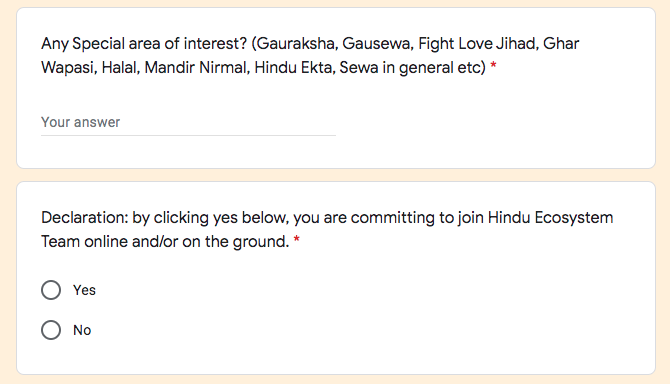 On 27th Nov, 2020, 11 days after our attempt to join Hindu Ecosystem and immediately after we received the Telegram group details, the Twitter trend with #JoinHinduEcosystem was announced by Kapil Mishra. The trend was fabricated through an ‘online toolkit’ which required participants to copy-paste the content to amplify the hashtag. 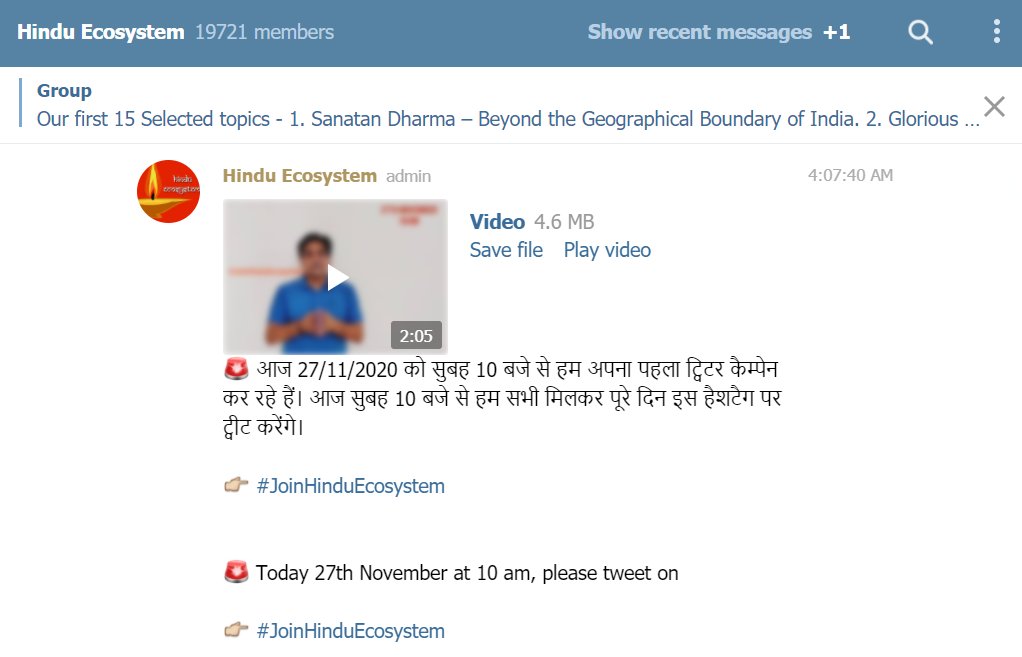 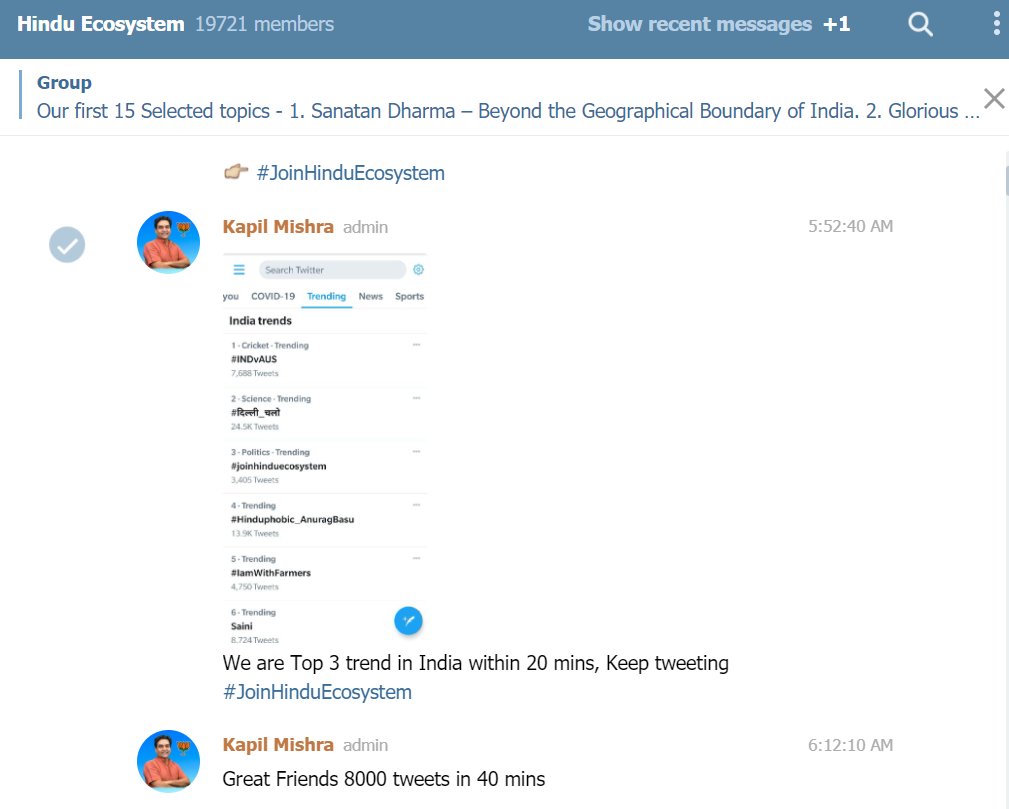 Mishra, who was at the time also the admin of the Telegram groups, was actively involved in congratulating the members for amplifying the tweets and reaching amongst top 3 trending in India within 20 minutes. The copy-pasted tweets looked somewhat like this: 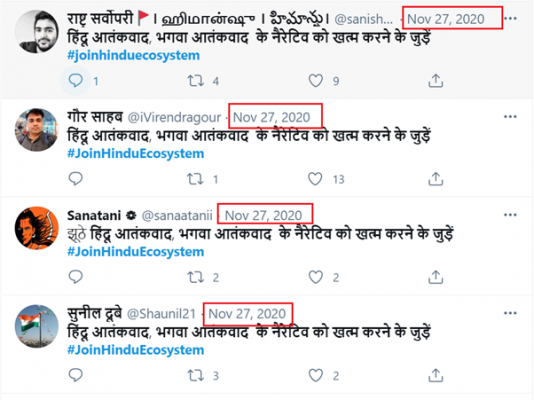 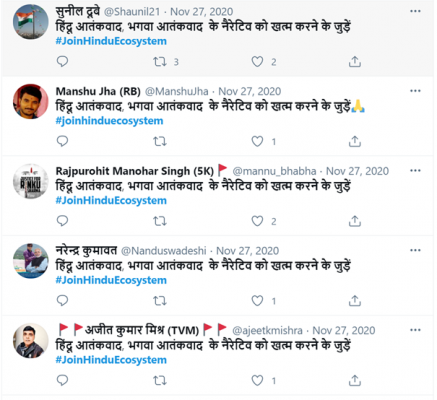 On 5th Dec, 2020, an online meeting with members of the Telegram group was announced, in which HES would be introduced and a roadmap would be discussed. In the slides, past twitter campaigns led by the BJP IT Cell were shared.

On 10th Dec, 2020, The Twitter trend #NoHumanRights4Hindus, a hashtag against interfaith marriages in India, was advertised by the group through an ‘online toolkit’. 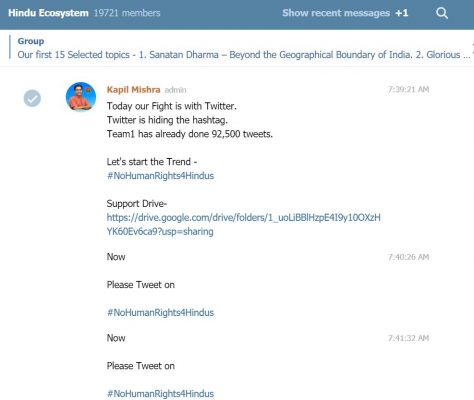 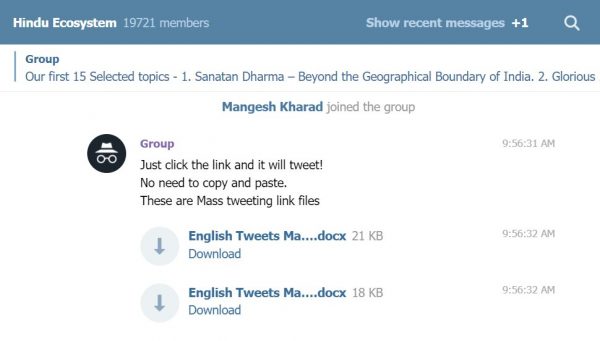 We highlighted the issue with such trend-creation through our Twitter thread on 15th February 2021, following which the story was also picked up by Newslaundry.

The Twitterati was quick to point the hypocrisy in the arrest and slapping with sedition charges of Disha Ravi for sharing a farmer’s protest online toolkit, while political actors and public figures like Mishra continue to engage in similar online behaviour.

There is a growing concern over fabricated online narratives and rumours which have led to offline consequences around the world. However, what the actual influence of these online behaviours are in (a) setting the social agenda, (b) setting the political agenda and (c) legitimising/rationalising political and social actions/inactions, remains to be systematically studied.

The trends are collected by Shivam Maurya who is a data-scientist by the day and social activist by evening. For analysis of the trends and collaboration drop an email to info@thelondonstory.org

The tweet thread was converted to the blog-post by team TLS.