As members of the Indian diaspora and its allies, we are deeply concerned about a series of hateful and genocidal statements made and circulated by Yati Narsinghanand Saraswati and his followers.

We demand the arrest of Yati Narsingh Anand and his supporters for continuously inciting hate and violence under non-bailable and cognisable sections.

Update: From December 17 and 19 2021, Yati Narsinghanand organized a Dharam Sansad (religious parliament) in Haridwar where several inflammatory hate speeches were made during the event. The Dharam Sansad was streamed live on Facebook and other social media platforms and video clippings of the speeches have been widely shared since. Speakers instigated members of Hindu religion to keep swords at home and be prepared for ‘cleansing’(safai abhiyan). Yet another speaker rather shamelessly called upon the people of the SC/ST communities to lodge false FIRs against Muslims under what he implied to be the Scheduled Castes and the Scheduled Tribes (Prevention of Atrocities) Act, 1989 so that they are sent to jail. One speaker said that ‘if we have to reduce their population, then we are ‘prepared to kill’ and that if we get 100 ‘soldiers’ they could kill 20 lakh of them. Several speakers made a call to acquire a weapon of Rs 1 lakh. Yet another speaker announced a reward of Rs 1 crore to any yuva sanyasi (young ascetic) who would become a Hindu Prabhakaran and also made a reference to the necessity of every Hindu temple having Prabhakarn, Bhindaranwale and Shubeg Singh to protect Hindu dharma.

Previously, National Commission for Women (NCW) in India took cognisance of one of his misogynistic diatribes from August 7, 2021, wherein he propagated misogynistic views against women of Hindu and Muslim communities. In the video, Yati is seen saying, “Hamari kamzori ke karan in jihadiyon ka shikar ban rahi hai” (Due to our weakness, (our women) are falling prey to these ‘Jihadis’). He made further offensive statement by stating that most prostitutes are Hindu women who fall in love with ‘Jihadi Musalman’ and are then blackmailed. He has also repeatedly called out “napunsakta” (impotence) or “Harapan” (being eunuch) as a weakness in Hindu men, thus resorting to toxic masculinity. He dog whistles by stating that Hindus won’t dare to do anything if a girl falls in love with a Muslim boy. Several statements of Yati – such as Musalman Hamari Behen betiyo ko mil Baat Kar khana chahte hai (Muslims want to share and eat-up our Hindu sisters and daughters) – are outright malicious, vicious, disrespectful, and display his lack of respect for women and well as his hate for the Muslim community. his statements creds to the conspiratorial narratives of ‘love Jihad’ inviting not just intrusion of personal lives of inter-faith couples but also an active threat to their lives.

As the chief priest of the Dasna temple in Ghaziabad, Yati has turned Dasna Devi temple into a breeding ground for training and manipulating politically-motivated Hindus to act against Muslims and disrupt harmony. Hindu men are systematically radicalised in his temple.

Disciples of Yati Narsingh Anand, including Vikas Sehrawat, Shringi Yadav, Sukhdev Sahdev, Rambhagat Gopal and Kunal Sharma, have acted on Yati’s calls for action and have been involved in vicious assaults. For example:Shringi Yadav, viciously assaulted a 14-year-old Muslim child for entering the Dasna Temple to drink water. Yati later justified this act by saying that he had trained his followers to give befitting replies to trespassers from a Muslim community.
Sukhdev Sahdev, another disciple of Yati’s, made statements on social media that non-Hindus should be banned within a 100-kilometre radius of the Ayodhya Mandir.
Kunal Sharma, was responsible for the infamous “sulli deals” case. He allegedly put up images of Muslim women on social media in a bid to “auction them”. Sharma also shared the numbers of Muslim women on social media with “Muslim Ladki Patao Abhiyan” (programme for ‘educating’ Muslim women).
Rambhagat Gopal, had shot at an anti-CAA protester outside Jamia Milia Islamia on January 30, 2020.
However, like Yati, Yati’s cohort has either not been arrested at all or granted bail on flimsy grounds.

Yati Narsingh Anand’s videos on Facebook calling for the genocide of Indian Muslims fall within the provisions of the Indian Penal Code (IPC): Section 153A, Section 295A, Section 298, and Section 505(2), all of these sections constitute a non-bailable offence under Indian Penal Code. Not arresting Yati and persons like Yati violates the constitutional mandate under Art. 20, 21, 22, 25 of the Indian constitution.

As members of Indian diaspora and allies of India, we take pride in Indian pluralism and constitutional values. We demand from the Home Minister of India Mr. Amit Shah that Yati Narsingh Anand and his key disciples/associates be immediately arrested for the act of inciting communal violence and creating an atmosphere of fear.

People Against Apartheid and Fascism 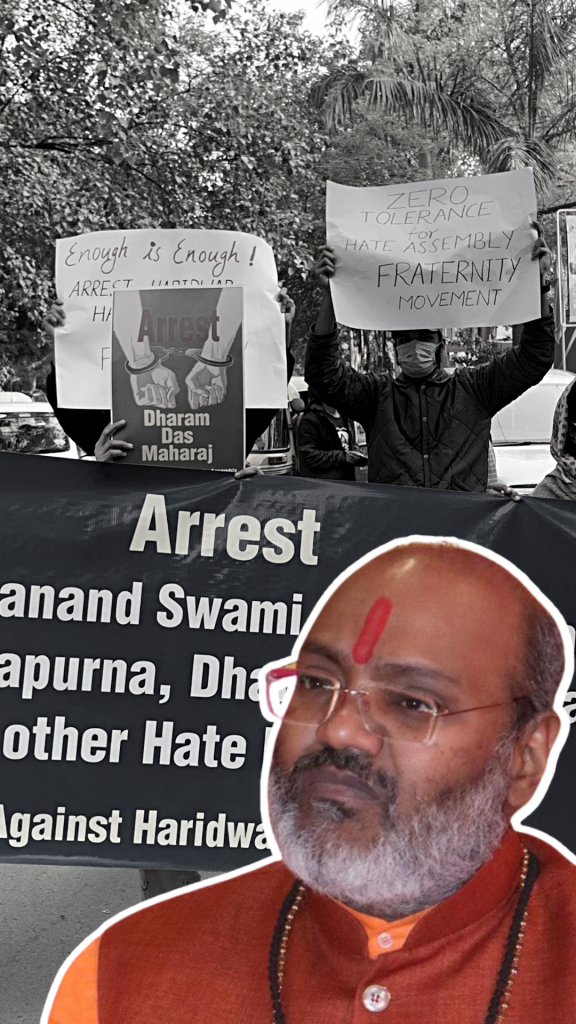