India on the Brink: Preventing Genocide

‘India On The Brink: Preventing Genocide’ Summit is called to mark the 20th anniversary of anti-Muslim pogrom in Gujarat in 2002

Over 50 renowned intellectuals, thinkers, scholars and activists are converging this week at a virtual three-day Summit – India On The Brink: Preventing Genocide – called February 26-28, 2022 by 20 global civil rights organizations to draw attention to the looming genocide of Muslims in India and discuss possible ways to urgently prevent it, including through international pressure.

Coinciding the 20th anniversary of anti-Muslim pogrom carried out by Hindu supremacists in Gujarat on the watch of then chief minister Narendra Modi, in which over 2,000 people were killed, the Summit has assumed urgency following widespread explicit calls for a genocide of Muslims by right-wing Hindu extremists in December.

A total of 17 panel discussions are being held over three days. The topics to be covered include the genocide and gender; hijab ban; Hindu response to majoritarian violence; massacre of Muslims in Assam in 1983; and Hindutva hate speech in the digital space. [Full list of panels]

“Muslims in India are facing a social, economic and political apartheid and this will continue unless the world recognizes the human rights violations occurring in India,” said Aakar Patel, formerly of Amnesty. Added Australian Senator Janet Rice: “Genocide is preceded by the systematic dehumanization of a community for years, accompanied by attacks on education, silencing independent journalism and stripping away of autonomy and freedom, which has been well underway in India for years.”

The Summit’s organizers said that the “rapid escalation” of human rights abuses against India’s religious minorities and marginalized communities had “reached a breaking point.” Prime Minister Narendra Modi’s anti-Muslim policies, the daily incidents of violence and hate speech against Muslims and minorities, and government apathy over open calls for genocide of Muslims have created a deeply repressive and dangerous situation for India’s 200 million Muslims,” the organizing coalition said.

The goal of the summit is to bring awareness to the situation in India, to advance the discourse on the international community’s role in safeguarding lives, and to facilitate deeper conversations about a vision for India that builds on its longstanding tradition of pluralism and respect for diversity, the coalition said.

According to Dr. Stanton of Genocide Watch, “The international community has a moral obligation to act now to prevent a cataclysmic turn of events in India, where millions of Muslims and other marginalized communities are already living in fear and experiencing the rapidly shrinking space for civil rights and religious freedom.”

Angana Chatterji, UC Berkeley scholar, said Hindu nationalists use propaganda and conspiracy to “mount concerted, violent disinformation campaigns, seeking to efface minority rights and weaponize the identity of Hindu males as the warrior-protectors of majoritarian India.” Ram Bhat, a Fellow at the London School of Economics, said the Summit will also dwell on the role of the digital media and use of the internet.

“Unpacking the role of WhatsApp as a weapon for violence and hate speech involves three key factors: A historical understanding of caste-based societies in India that continue to structure social relations today; a relationship of mutual benefit between big capital at global-national levels and political formations in India, especially the BJP; and finally, the total abdication of responsibility by Silicon Valley firms towards the consequences of their business in the Global South,” Bhat said.

The organizations are committed to the prevention of genocide and strive to seek the proactive responsibility of all in creating inclusive and peaceful societies. 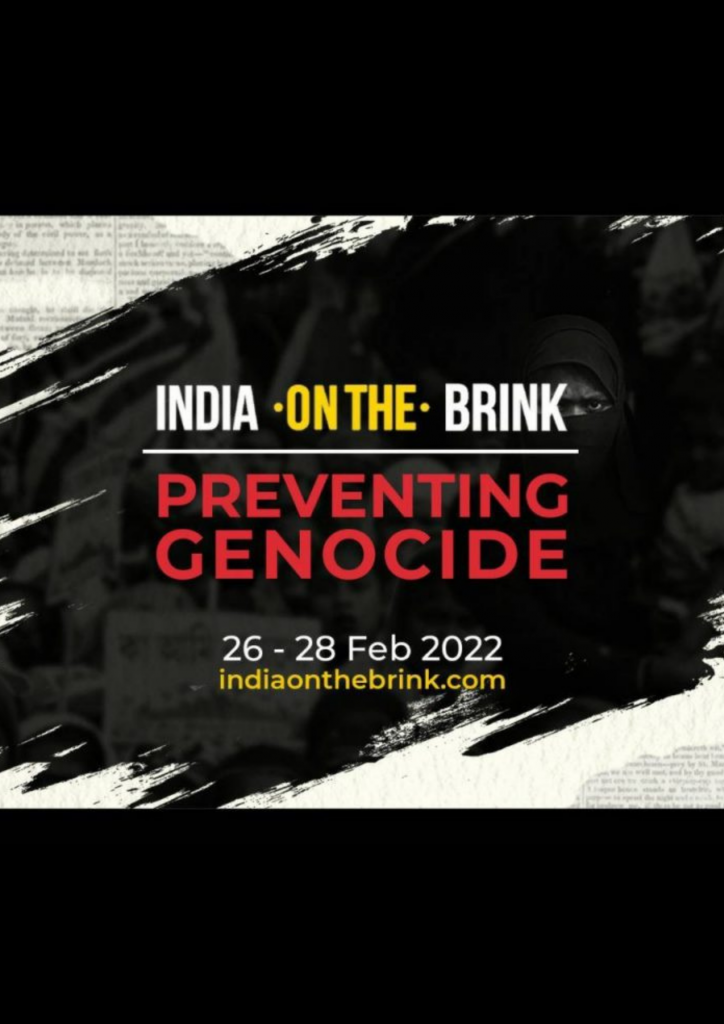