Blog: Celebrating Women’s Day 2022 in the Shadow of Hijab Ban and Looming Genocide

On today’s Women’s Day, we express solidarity with the girls from Karnataka who have invoked their constitutional rights to wear hijab in school, and all the strong women and girls from Indian minority communities resisting laws that seek to dominate and exclude them.

Recently, leading scholars and civil society actors came together in a three-day virtual Summit, and established that India is on the brink of genocide. The groups most imminently at risk are Muslims and Christians. The summit also strongly highlighted how women and girls from these communities are bearing the brunt. In this informal blog, that we publish on International Women’s Day, we want to reflect on how intersectional discrimination against Muslim women plays out in contemporary India that finds itself on the brink of genocide – namely as a dichotomy of infantilization and simultaneous antagonization – and stand with the women and girls exercising resistance.

In December 2021, the Udupi Women’s PU College in Karnataka, Southern India, imposed a ban on attending class while wearing hijab, a headscarf, thereby prohibiting a practice that had been completely normal for decades. After protesting for weeks outside of the college they were now denied entry to unless they unveil, six students approached the Karnataka High Court, citing violations of their right to education, religious freedom, and freedom of expression.

However, as protests against the ban spread, more schools and colleges followed in banning girls from attending class in hijab, and political leaders of the ruling BJP called out the petitioners in the High Court case for allegedly trying to “Talibanise” educational institutions and told them to “go to Pakistan”. A state-level politician in Karnataka, MLA Halady Srinivas Shetty, told the press:

For many years, a few students — maybe one or two every year — have been coming to college wearing hijabs, but never in such big numbers. There seems to be a united effort to deliberately disrupt harmony.

That he frames hijabi girls attending class as a “united effort to deliberately disrupt harmony” just underscores the gravity of the situation. Under a fascist India on the brink of genocide, normal and harmless acts, such as wearing headscarves, religious symbols, and praising deities through chants such as “Jai Shri Ram” and “Allahu Akbar” have become highly charged and soaked in violence.

Our research on Facebook using CrowdTangle has shown worrying trends in the recent months, with viral posts that call on Hindus to “fight” and “resist”, or alluding that Islamism will take over India if girls are allowed to wear hijab in schools:

Several videos have gone since viral of physical retaliation against hijabi girls, including one in which a group of men heckled a girl in hijab as she entered her college, charging towards her while shouting “Jai Shree Ram” (hail Lord Ram). In another video, a hijabi girl was heckled by members of the ABVP, the student wing of the far-right Rashtriya Swayamsevak Sangh of which many of India’s political leaders including Prime Minister Modi are members. Additionally, the girls who had approached the Court to enforce their right to wear hijab have been targeted both by people throwing stones at their families’ property, and by having their private details shared on social media.

As activist Somaiya Zama has summarized, moves such as the hijab ban are being framed as allegedly progressive and as removing archaic beliefs that oppress women, but are in fact an exercise of control within a larger fascist context in which Muslim women are to be removed from the public sphere. The hijab ban constitutes selective secularism, in which religious minorities are forced to be religiously “neutral”, while the current government advances an agenda that clearly puts more of its own religion, albeit in a contorted, caricatured and fanaticized form, into the public sphere. This becomes blatantly apparent in, for instance, Karnataka’s BJP President Nalin Kumar Kateel proclaiming:

There is no space for hijab or such things. School is a Saraswati (Hindu Goddess) temple.

In the case currently underway at the Karnataka High Court, the state government has demanded proof that wearing hijab is an essential practice for women in Islam, as it allegedly only then falls under essential freedoms under the Constitution. This demand is not only hyper-technical and misguided, but dangerous, as it directly builds on the already polarizing and divisive narrative that there are religious practices fundamentally at clash. A scarf, such as a chunni or a dupatta, are a normal part of Indian dress, and women and girls frequently casually cover their heads simply out of convenience. The hijab ban, then, ascribes to an act that all kinds of women do a religious significance, and bans it on flimsy and prejudicial grounds. In fact, the principal of one school allowed the girls to attend class by wearing a piece of cloth around their head, thereby showing that the issue is not with the headscarf per se, but with Islam. The petitioners have therefore rebutted this twisted demand, and reiterated the bare facts at hand to be remedied: Girls are being denied education for their choice of clothing, thereby denied the right to freedom of expression and the right to education – and this is not acceptable.

Alia, one of the girls protesting the hijab ban, told Divya Marathi (translated from Marathi):

Why should my education stop because of the hijab? It is my right to wear a hijab and it is also my right to get an education. I live in a secular country, why am I facing this situation here? Why do I have to choose between education and hijab? Both are my rights and I want both. I don’t even think of choosing between them. Nobody forces me to wear a hijab. This is my independent choice.

The choice of clothing falls under the fundamental right to freedom of expression, which can under the Indian Constitution only be infringed upon if the government proves that the choice of clothing is incompatible with public order. In accordance with the equality of opportunity of women and girls enshrined in the UN Convention on the Elimination of All Forms of Discrimination against Women (CEDAW), women and girls must not be denied access to education on arbitrary grounds. With especially student groups emerging as vocal against India’s descent into fascism and genocide, forcing girls from minority communities to stay away from schools and campuses is dangerous exclusion. 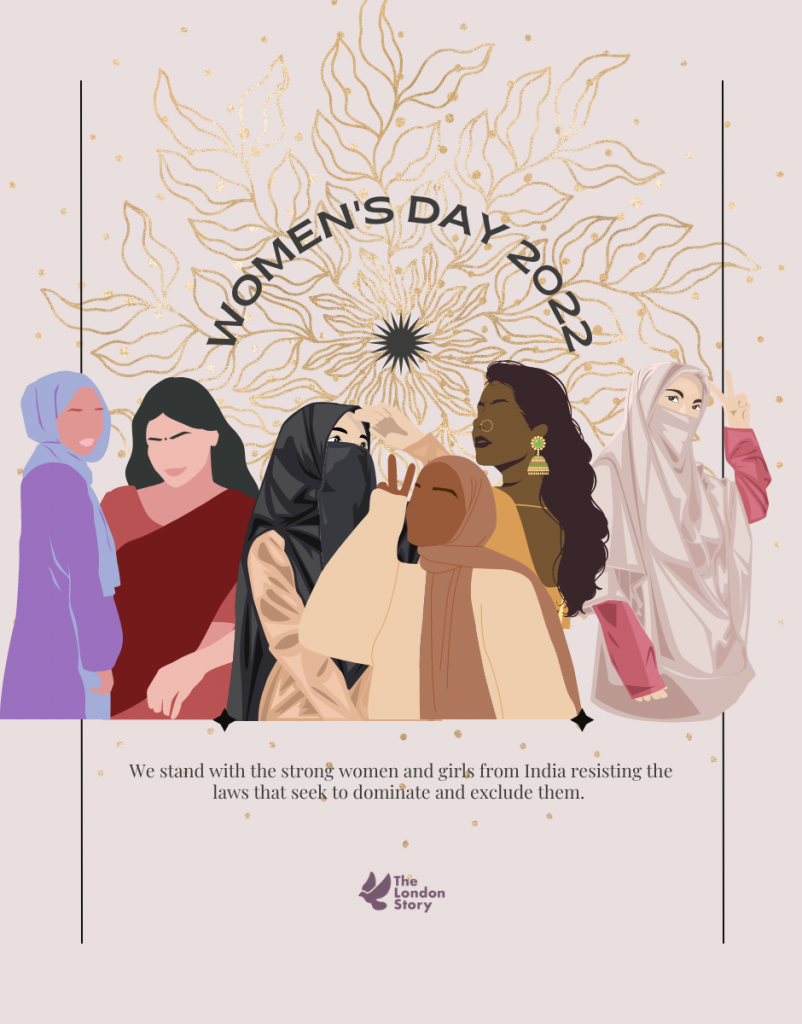