Indian diaspora across the world are taking to the streets to condemn the BJP government’s persecution. These are times in which minorities in India have their homes demolished and children killed as punishment for dissent, which destroys lives, and grossly violates a range of human rights norms – the prohibition of torture, cruel, inhuman or degrading treatment, right to a fair trial, equality before the law, right against arbitrary interference with family and home, and the right to life.

Indian diplomats played a crucial role in codifying the indivisibility of human rights in the Universal Declaration of Human Rights (UDHR). Yet, the BJP government’s actions grossly dishonour this human rights tradition.

The religious targeting of the government crackdown clearly shows: The government’s actions go against the core of human rights. In today’s India, not all human beings are born free and equal in dignity and rights (Article 1), and there is a distinction made based on religion, or political or other opinion as to who gets protection, and who does not (Article 2).

In The Hague, one person read out this speech:

In my many years of living in The Hague as somebody who holds an Indian passport I have never stepped foot inside this embassy but I have stood outside of it yelling so many times that each time it feels less significant and more helpless. I don’t know what I can say today that has not already been said by the fearless Muslim activists fighting for their lives and dignity, and also for preserving the fabric of your country that is actively being torn apart and burnt to ashes by the fascist state.

But I will say this.

Stuck between a hateful population hellbent on the annihilation of Muslims, killing, lynching, murdering, dehumanizing them and a state that not only enables but perpetuates this violence, Muslims in India today have no allies.

The Indian state manufactures proof of its fascism in the form of blood and extreme violence inflicted on the Muslim body everyday and it somehow is never enough proof.

I don’t know how well I can communicate this and how well you can truly understand it, but existing in India as a Muslim is an act of resistance and this is why we do not need telling on how to resist. Years of waking up in rage and fear and helplessness and persevering on our very own has taught us more than anybody ever could.

I have no will in me to speak from and with love anymore, but if you are here today I know you come in solidarity. And I want you to know, that solidarity doesn’t end with this protest, doesn’t end once another episode of televised violence dies down, doesn’t end with fatigue from caring about an issue for a prolonged amount of time.

Boys as young as 14 shot by the police, demolitions of Muslim homes, mob lynching of Muslim men in the streets, constant Anti-Muslim sentiments on all kinds of media consumed, banning beef, banning Urdu, banning madrasas, banning the Hijab, criminalizing marriage, stripping away of citizenship, arrests, detentions, torture, calling for a genocide of Muslims at national conferences. If you are here I also know that you are already vaguely aware of the situations of Muslims in India, but violence against Muslims is so normalized that it only becomes a source of discomfort once it confronts you so loud in the face that you just can’t look away. This is to say that we are here in protest today while the violence continues and will continue and so should your sense of rage and solidarity.“

In Berlin, as Modi visited Germany to meet with German chancellor Olaf Scholz in May, a group of Indians gathered in protest and chanted “Modi down down”:

The day after, Modi visited Copenhagen to meet Nordic heads of state, and protestors gathered there too: 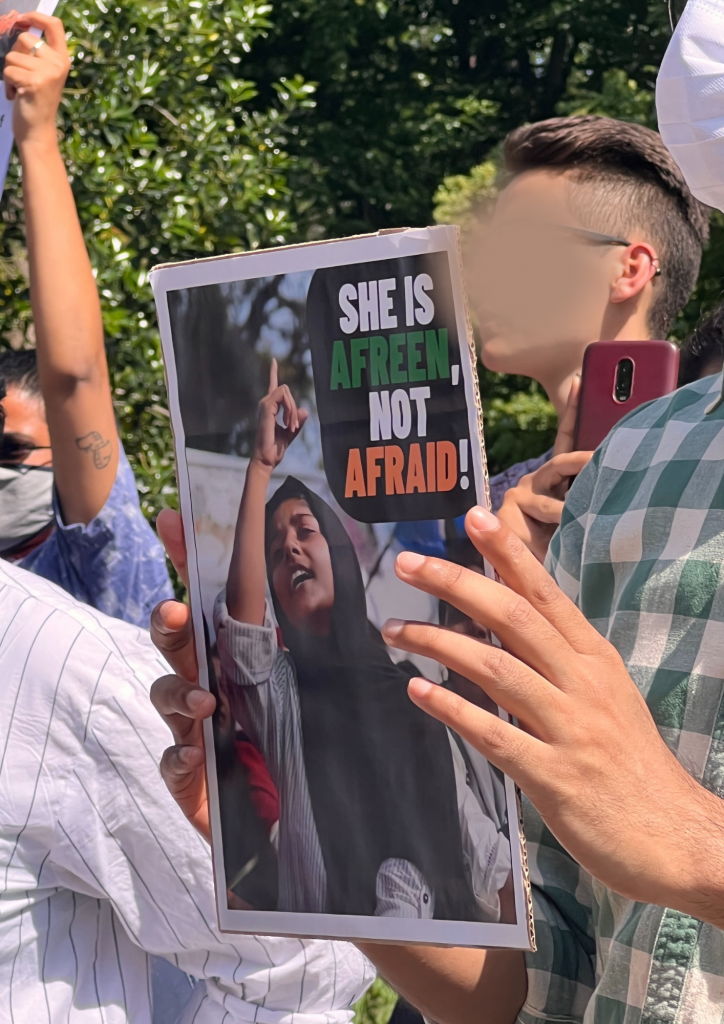