India’s hypocrisy on protecting freedom of expression at G7

Last Monday, the leaders of the Group of Seven (G7) nations signed the “Resilient Democracies Statement”. India, who was invited as a guest to the G7 Summit, also pledged its commitment to enabling “open public debate, independent and pluralistic media”, and resolved to “protect the freedom of expression and opinion online and offline.”

Yet, in the shadow of the G7 limelight, prominent journalist and Fact-checker Mohammed Zubair was arrested on the same night in New Delhi on trumped-up charges. A hallowing twitter thread by his colleague, Pratik Sinha, narrates how Zubair was taken to an undisclosed location, by police officers without identification. Zubair was charged with “hurting religious sentiments” on a complaint made from an anonymous account with a single follower and a single tweet. The account is since deleted. Zubair’s arrest, which is taking place during a crackdown on civil society, stands in such a blatant contrast to India’s pledge at the G7 that it is nothing less than a mockery of the Resilient Democracies Statement.

Zubair, who has dedicated his life to sifting through viral social media content to determine which is reliable, and which misinformation or even outright propaganda, is only one of many examples. Siddique Kappan, a freelance reporter, was arrested in October 2020 when going to report on a rape case, and has been held in pretrial detention on anti-state, incitement, and terrorism allegations ever since. Police in the BJP-ruled state of Uttar Pradesh held him incommunicado for 48 hours before formally opening an investigation. In January 2021, Munawar Faruqui, a stand-up comedian, was arrested over a joke he had not yet made, and spent a month in jail before the Supreme Court of India intervened. In 2019, several academics and civil society actors sent an open letter to Modi, urging him to take meaningful action against hate crimes. A lawyer quickly filed a petition claiming the open letter had “tarnished the image of the country”, and the police registered a case against the signatories. One thing is clear: The grounds of arrest are becoming increasingly flimsy.

Meanwhile, literal “preachers of hate” such as Yati Narsinghanand, who has organized several congregations at which speakers called on their followers to “proclaim India as a Hindu Nation”, “rape Muslims” and “exterminate Islam”, have had dozens of cases filed against them – but remain free. Worse even, members of Modi’s BJP have also publicly endorsed these calls to genocide. This is even though such calls are followed by vigilante mob-violence, including abusing and killing of Muslim children at the hands of mobs and the state police, and even though leading scholars have warned that India is moving rapidly towards a genocide.

India’s Prime Minister Modi has created a state apparatus in which those who spread hatred walk free, while those who stand up for truth are locked up. Modi has risen to the leader of a person cult, in which disapproval of him and his Hindu-supremacist ideology is equated with threatening the nation. This cult is all too similar to Putin’s own cult leadership in Russia.

Germany’s Foreign Minister Annalena Baerbock of the Greens has declared that her foreign policy would be rooted in a recognition of Germany’s “historic responsibility”. At the UN General Assembly in March 2022, she sharply criticized states who have failed to condemn Russia’s invasion. Citing Desmond Tutu, she said: “Those who are neutral have chosen the side of the oppressor.” It is perhaps also for that reason that Germany under the new government has explicitly named “a resolute commitment to open, resilient, democratic societies and to human rights” as the focus of its G7 presidency.

But it almost appears as though there are only two countries of concern on Germany’s checklist – China and Russia – and all others receive a free pass. The G7 pulling Modi into a metaphorical warm embrace as he signs the Resilient Democracies Statement is blind to reality. India may once have been a democracy. But since the election of Narendra Modi as Prime Minister, the Hindu-supremacist government sees no place for rule of law, constitutional order or respect for human rights. If the G7 really want to take the promotion of democracy seriously as an ambition, then they must speak up on the hypocrisy. 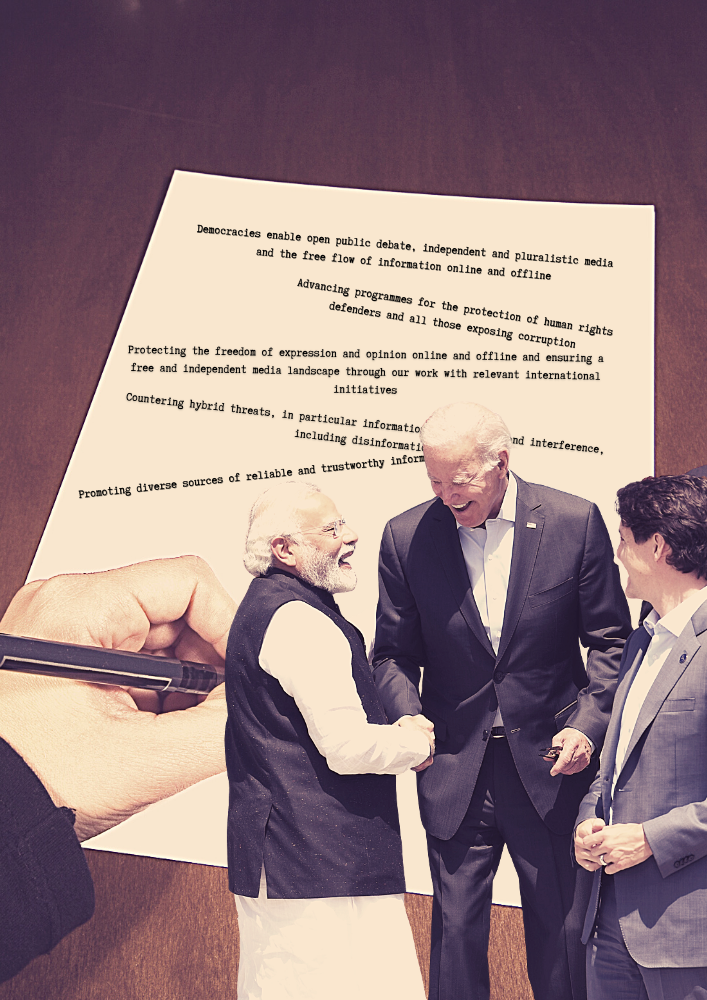