In light of escalating violence among diaspora communities in the UK, researchers and grassroots organisers express concern about online hate speech from India transcending borders. At an online briefing on Thursday, September 29, organised by Netherlands-based think tank, Foundation The London Story, researchers observed that social media has been widely used to mobilise for riot mobilisation in India, a worrying pattern now also observed in the diaspora. The briefing was attended by the teams of the Chair and a Vice-Chair of the European Parliament’s Human Rights Subcommittee.

In September, tensions flared up in cities in the UK, with mobs marching through Leicester chanting religious slogans and brandishing weapons. Twenty-five police officers were injured, and police arrested at least 47 persons.

Civil society groups have been concerned about the proliferation of hate speech leading to violence in India. At the briefing, Dr Ritumbra Manuvie from the University of Groningen in the Netherlands presented her research on networks of fan pages amplifying far-right once fringe voices on Meta’s platforms in India. The 2022 report, “Preachers of Hate”, archives dozens of examples of dangerous content and extensive fan page networks, including calls for Hindus to mobilise against and eliminate Muslims.

“Hate speech on social media transcends boundaries and creates social dissociation not only within India, but also amongst diaspora groups abroad. We can clearly see these lines of division on lines of religious belief and political orientation strongly emerging among diaspora community, too,” says Dr Manuvie.

Dr Cecilia Jacob, Associate Professor at the Australian National University and co-chair of the Asia-Pacific Working Group of the Global Action Against Mass Atrocity Crimes (GAAMAC), highlighted that hate speech in India was instrumental in inciting and mobilising several bouts of violence, including the 2020 ‘Delhi riots’ that left 53 dead, and other attacks on Christians, Muslims, Sikhs and ethnic minorities.

“A lot of Western countries have focused on atrocities happening in other countries and pointing to ‘poor governance’ or ‘fragility’. But we need to better understand that hate speech everywhere is a risk factor for atrocity crimes,” says Dr Jacob.

The experts at the briefing warned that not only social media, but also online news portals and traditional television are complicit in fanning hate. On the one hand, Indian media outlet OpIndia repackaged the violence in Leicester to claim towards Indian audiences that Hindus are persecuted in the UK. Simultaneously, UK media has failed to adequately report on the incidents so as to not further incite violence.

Amanda Morris, Community Organiser at Stop Funding Hate and Community Liaison at the Muslim Council of Britain, condemned how mainstream media has been reporting on escalations in Leicester. “It uncritically replicates conspiracy theories, and lends itself to anti-Muslim hate speech from trolls,” she commented.

Political leaders around the world are increasingly expressing concern about hate speech of Indian origin. In 2021, several UK Labour MPs in an oral contribution warned that religious tension from India was spreading to the UK. In 2021, the European Parliament passed a resolution recommending the EU “work to eliminate and deter hate speech that incites discrimination or violence” in India.

The recent escalations in Leicester between Hindus and Muslims from the Indian diaspora constitute only one example of many in which diaspora are mobilising around hateful views. In June 2022, a Canadian influencer of Indian origin went viral in a video in which he proclaims he supports killing Muslims and Sikhs in India, as “they deserve to die”. Toronto Police are investigating him. In 2020 in Australia, a member of the Indian diaspora was deported for hate crime against people of the Sikh faith. 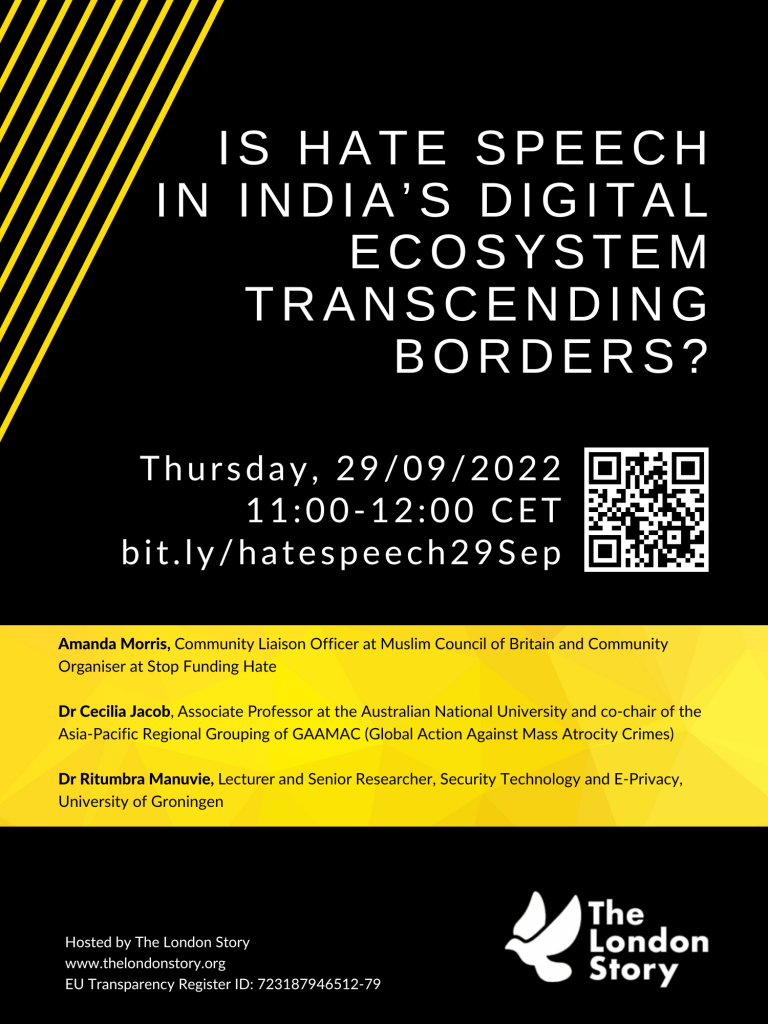