Ahead of EU-India FTA negotiations, experts note India’s priorities may not align with the EU

Ahead of the next round of negotiations between the European Union (EU) and India on a Free Trade Agreement this week, the think tank The London Story arranged for experts to brief Members of the European Parliament on India’s foreign policy priorities and the impact of domestic Hindu nationalism on these priorities.

Highlighting that previous negotiations between the EU and India were stalled in 2013 due to irreconcilable differences in ambitions, the experts noted that India’s priorities may still not align with those of the EU.

“I push for the EU to question what a ‘like-minded’ partner is. This can be defined as a strategic partner in the Indo-Pacific or a commercial partner. But if we’re talking about political values, there may be mismanaged expectations,” says Nicolas Blarel, Associate Professor of International Relations at the Institute of Political Science, Leiden University.

During the briefing, consequences of domestic Hindu nationalism on economic priorities were of particular concern. Referencing India’s flagship initiatives “Make in India” and “Atma Nirbhar” (self-reliance), the experts noted that an aim underlying India’s turn towards free trade agreements is to become a global manufacturing powerhouse.

“Despite India’s increasingly exclusionary nationalism, Modi is a realist, and has been careful to moderate his foreign engagements. Still, India will continue to be a challenge for European policymakers,” says Dr Rani Mullen, Associate Professor of Government at William and Mary.

The experts raised questions on the representativeness of the Indian team negotiating the FTA, and highlighted that calls for trade liberalisation are not universal. “Our research shows there has been a centralisation of decision-making in the Prime Minister’s office since the election of Modi – this might be seen both as an opportunity in the context of making trade deals,” highlights Dr Surupa Gupta, Professor of Political Science and International Affairs at the University of Mary Washington.

The V-Dem Institute has considered India an “electoral autocracy” for several years in a row, and Freedom House’s Freedom in the World 2020 report ranked India as one of the ‘Countries in the Spotlight’ for the “deterioration of basic freedoms”. In Tata Trust’s Rule of Law Index 2020, India performs “moderately” in most categories, and “worst” in the categories Order and Security and Civil Justice.

The experts also discussed India’s policy towards Russia, which has become of direct concern to the EU since the Russian invasion of Ukraine, and emphasised India’s preference for strategic autonomy and non-alignment. India initially abstained on key votes on Russia in the UN Security Council, has increased its imports of Russian oil and coal, and is working on bilateral measures with Russia to facilitate interbank transfer services.

The briefing, which was organised by The London Story, a think tank led by Indian diaspora resident in the EU, comes during a process of stakeholder engagement by the EU on the Free Trade Agreement. Under European Union law, the EU must fully consider and incorporate non-trade objectives, such as environmental, social and human rights protection in its trade agreements. Ahead of the trade negotiations in October, the European Commission has therefore been engaging with civil society in India and the EU to prepare its proposals for the agreement.

The Agreement is planned to cover access to each other’s markets, for goods and services, a framework for investment, including investment protection, rules that frame trade, such as intellectual property and competition, and sustainable development. 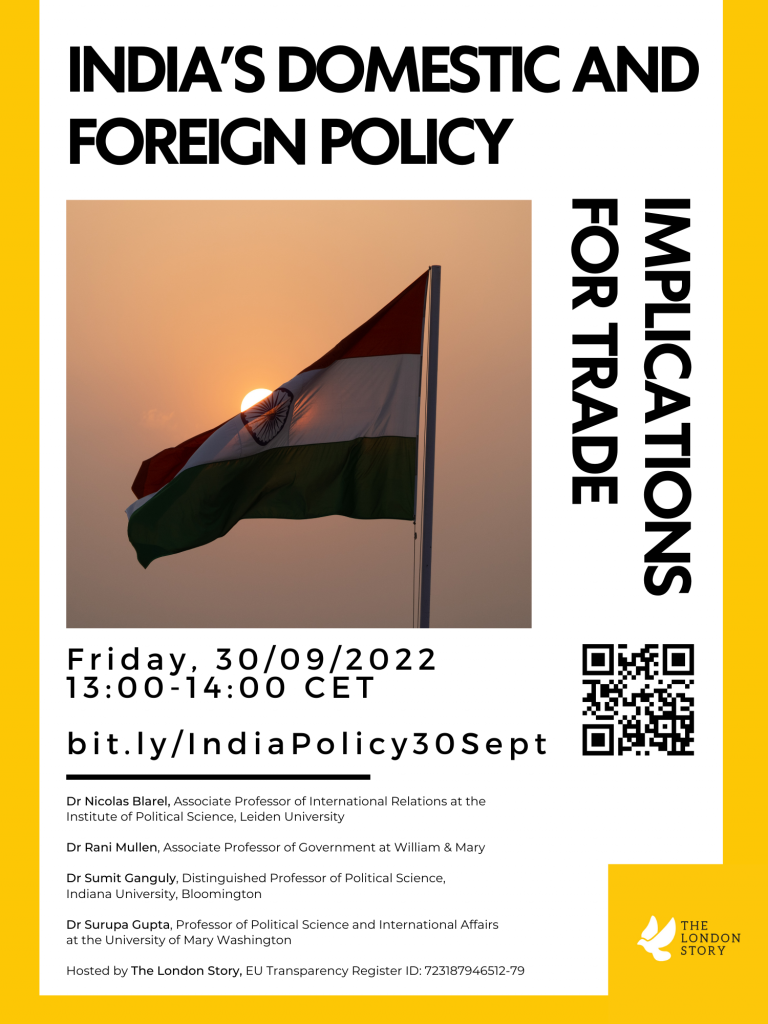