Indian diaspora members in Brussels toured the city to raise awareness about attacks on religious minorities in India. With two large banners on bicycles, which displayed statistics on hate crimes, the three-day tour took place on occasion of the International Human Rights Day on December 10, which marks the anniversary of the Universal Declaration of Human Rights (UDHR). While India was instrumental in framing the human rights language for the UDHR, the rights of minorities have steeply regressed under the current Hindu nationalist regime of Narendra Modi.

After reminding passer-bys of Human Rights Day and its theme to #StandUp4HumanRights, the banners on bicycles informed passer-bys of the steep marginalisation of and frequent attacks on religious minorities in India. One banner read: “In India, police tortured 41 children. Their crime? They are Muslim.” This referred to the treatment of 41 Muslim children by Uttar Pradesh police as part of the crackdown on protests against the discriminatory Citizenship Amendment Act in 2020. Another banner informed passer-bys of an incident in October 2022, when police officers in Gujarat tied nine Muslim men to a pole and publicly flogged them, while a civilian crowd cheered.

The diaspora members reported general support from the public.

Citing figures from the DOTO Database since 2014, which constitute a minimum of publicly available examples, the banners noted that 2420 people are attacked for their religion annually on average. Over 86% of victims are Muslims, but violence against Christians has also risen by 81% between 2020 and 2021.

The diaspora activists chose Brussels as the location for the tour, as Brussels is home to the headquarters of the European Union. Among the stops on the bicycle tour was the European Parliament, where the message of the campaign was seen by employees and visitors passing by. The banner also made a brief stop at the Indian embassy in Brussels.

“India must remember that it was built on tolerance, secularism, diversity and equality. On today’s Human Rights Day, we call on the Indian government to ensure dignity, freedom, and justice for all people, including its religious minorities”, says Dr Ritumbra Manuvie, who directs the Indian diaspora-led think tank The London Story.

The diaspora members are part of The London Story (TLS), a diaspora-led think tank with its seat in The Hague, The Netherlands. TLS monitors and archives hate speech against religious minorities in India on social media, and advocates for an inclusive EU-India relationship with human rights at its core. 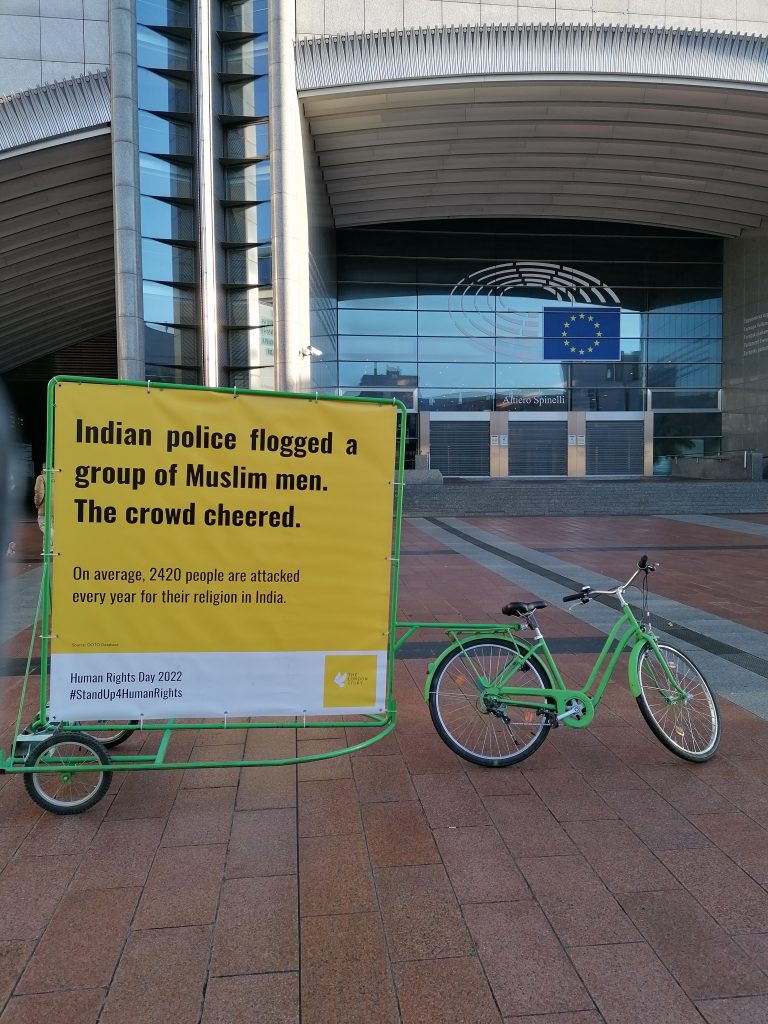