Member of the European Parliament Markéta Gregorová moderated a parliamentary briefing where international experts warned about the capacity of Indian social media users to manipulate the information environment for political and ideological propaganda. The briefing, which was co-hosted by diaspora-led think tank Stichting The London Story on November 8, took place under the theme “Taking Stock of India’s Information Manipulation Ecosystem”.

Speaking at the briefing were Facebook whistle-blower Sophie Zhang, Chief Data Analyst of the London Story Saikat Chatterjee, senior correspondent at BOOM Archis Chowdhury, doctoral researcher Vignesh Karthik, and Mr. Vihang Jumle. The briefing was attended by members of the European Parliament, the European Commission, experts at the United Kingdom’s Home Office and others.

Gregorová, who is a member of Greens and the European Parliament’s Special Committee on Foreign Interference in all Democratic Processes in the European Union, including Disinformation, cautioned: “While digital India plans to bring more Indian citizens online, first time internet users are easy to fall prey to political scams and clever lies. We must consider the implications this has for how the largest democracy in the world should navigate digitalization.”

Sharing from the complete dataset of BOOM’s fact-checks in 2021, Archis Chowdhury noted that over half of all disinformation identified was of political nature. While attributing responsibility is not possible, given the anonymity of the internet, the majority of disinformation favoured right wing Hindutva ideology. Adding onto this, Dr Saikat Chatterjee highlighted that Facebook pages spreading such harmful content range from fan pages, to news sites, to political actors, to more general pages, thereby pointing to a dangerous mainstreaming.

The expert panel expressed concern especially about the involvement of political actors in information manipulation in India. As Facebook whistle-blower Zhang highlighted in the briefing, disinformation is spread by actors connected to several political parties. “India is undergoing a troll farm arms race,” said Sophie Zhang. The use of troll farms and “IT Cells” hired as “mercenaries” by political parties is normalised, she noted, which constitutes a serious risk for democratic deliberation. Notably, India’s Home Minister Amit Shah in 2018 when addressing the BJP’s IT cell announced: “We are capable of delivering any message we want to the public, whether sweet or sour, true or fake.”

Looking ahead, the panel expressed concern about future trends in India’s information manipulation ecosystem. Sophie Zhang explained that neither the Indian government nor social media platforms have taken adequate steps to address information manipulation in India. On the one hand, even though the Indian Parliament invited Zhang to testify in November 2021, the Parliament’s Speaker has prevented this to date. On the other hand, platforms have so far done insufficient to respond to evidence of coordinated amplification of harmful content in India, which the panellists expect will only deteriorate with the takeover of Twitter by Elon Musk. “Elon Musk will not pay attention to things in India. Additionally, most governments are only interested in what is happening in their own countries. It is unlikely there will be any action on India,” she noted.

As political agenda-setting increasingly occurs through social media, the experts raised questions about the ability of EU citizens and Indians to forge meaningful cross-border networks across identities and nations within an ecosystem of information manipulation. Chief Data Analyst of The London Story Dr Saikat Chatterjee stated: “As the EU is seeking closer collaborations with India, we are investigating the capacity of India’s information manipulation ecosystem to spread disinformation and hate speech, and its potential impact on democracies around the world.”

The briefing highlighted how the use of social media has serious implications for political communication, as several sides use false information amplified by fake engagement to build false and synthetic agendas. The panel expressed concerns about the potential risks of such synthetic amplification and election misinformation when both the European Union and India will hold major elections in 2024, and raised questions about implications for the EU. “Elections, on whatever scale, pave a consistent way for religious and communal disinformation,” warned Archis Chowdhury.

Fake News In The Time Of Coronavirus: A BOOM Study | Boomlive

Muslims Were Biggest Target Of Fake News In 2021: BOOM Study

Political and Human Rights Situation in India (The London Story, 2022)

Twitter User Threatening Kohli’s Daughter With Rape Is From India, Not Pak | BOOM 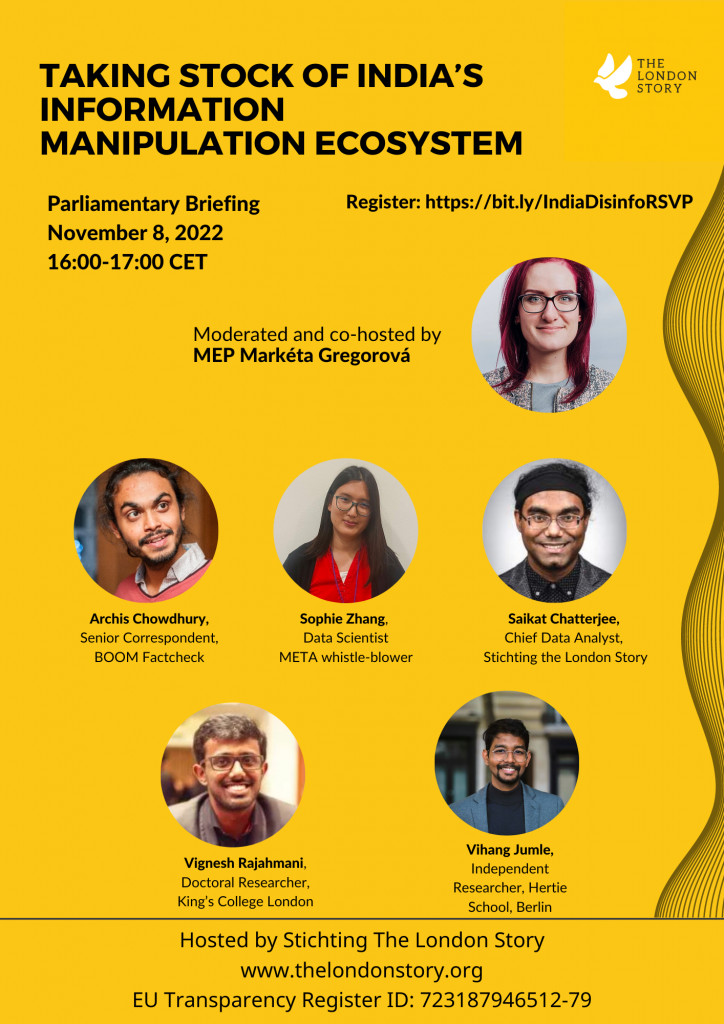